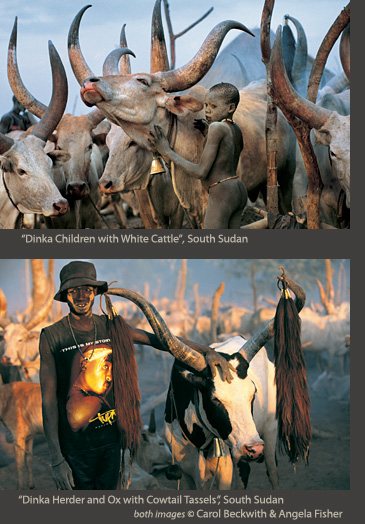 A timely new online exhibition, curated from Beckwith’s & Fisher’s renowned book (“Dinka: Legendary Cattle Keepers of Sudan” published 2010 by Rizzoli) on the Dinka people of South Sudan, captures the traditional culture of Africans whose world has been rapidly transformed and is again threatened by war.

“Our deepest wish for the future is that peace be maintained between the north and the south of Sudan, making it possible for the Dinka to follow their traditional way of life and maintain their deep-rooted human values. Although there has been such decimation of the lands and the people, we draw hope from the wisdom of an early 20th century Dinka prophet: ‘Piny nhom abi riak mac – the land may be spoiled yet it will remain intact.’ This saying reveals dignity in the face of catastrophe – the possibility that both war and peace, good and bad fortune, all offer the chance of renewal.” ~ Carol Beckwith & Angela Fisher