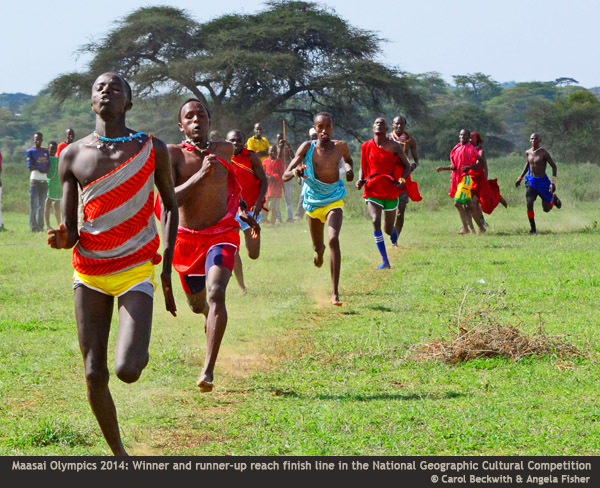 Angela Fisher and Carol Beckwith are completing their sixteenth book on African Ceremonies. African Twilight will not only feature some of the last great traditional ceremonies in Africa, but will also capture ancient cultures in transition

For Carol and Angela, who have photographed Maasai ceremonies for forty years, including the warrior lion hunt, the Maasai Olympics of 2014 was an extraordinary ceremony of transition not to be missed. At the foot of Mt. Kilimanjaro, history was being made — instead of hunting for lions, Maasai warriors, in full regalia, were hunting for trophies.

David Rudisha, Olympic gold medalist (London 2012) in the 800 meters and world record holder, is Patron of the Maasai Olympics, the world’s most famous Maasai, and a noble warrior himself.

During the three days they spent with David, Angela and Carol were deeply impressed by his extraordinary character, dedication, and humility. Devoted to his people and their future, David has chosen to be a role model enabling young warriors to follow in his path.

The Maasai Olympics really touched Carol and Angela’s hearts. Seeing young warriors direct their physical prowess away from lion hunting to competing in sports was inspirational — the essence of the great Maasai culture was being preserved while, at the same time, being adapted to the twenty–first century.