Affirmation for Beckwith & Fisher photography of the Dinka people 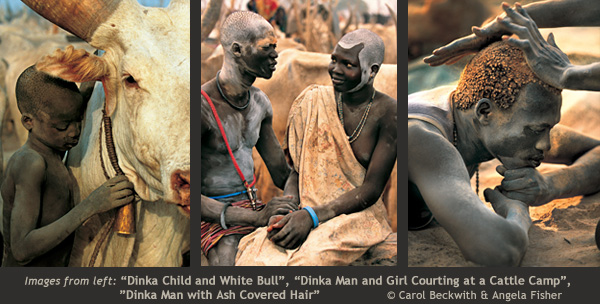 Recently there has been a great deal of discussion about photography of African cultures in general and the work of Carol Beckwith & Angela Fisher in particular, especially their photography of the Dinka people of South Sudan. Here are some interesting commentaries and affirmations:

Professor Donald Johanson, who discovered the “Lucy” skeleton in Ethiopia 40 years, had this to say about their work:

“Carol Beckwith and Angela Fisher’s dedication to recording African ceremonies has produced a vitally important photographic record of human creativity that is rapidly vanishing. Their deep personal involvement and compassion for the endless imagination in African tribal diversity has given peoples around the globe an insight in to the sophistication of these cultures not only through their photographs, but also with the informative texts that put the photos into a wider cultural context.

“Anyone who personally knows these two chroniclers of the beauty, sensitivity, and ingenuity that is part of the African majesty will understand Beckwith and Fisher’s deep thoughtfulness to celebrate and not exploit these tribal groups. Nudity is an important element in many African cultures and not considered a form of eroticism or vulgarity. It is the limited sense of cultural relativity among western observers that leads to such notions.”

“Unlike tourists who casually visit African tribal peoples with their own preconceived notions of exploitation, these two photographers bring an understanding and admiration of the artistry that reflects the true nature of the specific beliefs of those who are being photographed.“

Sanna Arman, a student in International Commercial Law at the University of Surrey, U.K. , and a South Sudanese hailing from the Dinka ethnic group, wrote in an article for Face2faceAfrica.com:

“When we get to know and appreciate a group of people, which we share with the world through our books and images, we care about what happens to them. We care deeply about the 150 ethnic groups with whom we have lived and worked – we have dedicated our lives to sharing their powerful beliefs, rituals, lifestyles and cultural traditions with the world at large.

We want future generations of Africans to know where they came from and what their grandparents believed. Over 40% of what we have recorded no longer exists, a tragic loss, diminishing the richness and diversity of the human panorama. We hope to leave our archive of the cultural heritage of Africa, 40 years in the making, and still ongoing, to future generations who care about who we are as human beings, where we have come from, and where we are heading”